“Another Look – The Restored European Film Project” marks a unique venture whose purpose is to raise awareness to both classic European cinema and the means by which it is preserved. Through the collaboration of the European Union and European embassies in Israel, this project annually presents various films, one from each of its participating nations, all in restored versions and high quality formats. These works are not only chosen for their artistic merit but because they meaningfully reflect on different facets of European film heritage. Taken together, they thus give evidence to the diversity of cinematic practice, as it evolved for over a century.

Four Nuns and a Priest

Though rarely grouped as a genre, films about nuns and priests have garnered great success in various national contexts over the past century. The series “Four Nuns and a Priest” attempts to decipher the attraction behind these men and women of the cloth, wondering how they have become the focus of desires and fears regarding the physical and metaphysical, sexuality and spirituality, freedom and submission.

Mono-no-aware: In Search of Lost Time

In spite of its centrality to Japanese culture, the term “mono-no-aware” defies easy definition. Literally, it signifies “the pathos of things”, yet its meaning runs deeper, and relates to the sweet sadness which is evoked by the passage of time. This screening series shows how the feeling of “mono-no-aware” appears in films of different cultural contexts, and how it helps us cope with the fact of our impermanence.

See screening flyers: Late Autumn | The Magnificent Ambersons | The Mirror | The Leopard | Of Time and the City

Men on the Verge of a Nervous Breakdown

As the old song goes, “this is a man’s world.” But does this mean that, amidst pleasures of privilege, there is neither burden nor affliction? Covering over five decades, this series focuses on several male figures who have been pushed to the verge of insanity and beyond. Through their stories, we will come to know the pressures of accommodating to a masculine ideal, and the inevitable crises that ensue.

Dreams of an Empire

Nowadays the term “empire” may strike many as abstract. But this was not the case for millions of westerners living in the golden age of European imperialism. Though their majority rarely traveled outside the Continent, “empire” nevertheless became a vivid part of their imagination, largely due to films that pictured the colonies as the West’s exotic playground. This series explores how such dreams of an empire were shaped by western “colonial” cinema. It does so by presenting three “couplings” of colonialist films–one from the genre’s heyday (1930s) and one from its period of decline (post-WWII)–which address different dimensions of the imperialist dynamic: conquering, occupying, and fantasizing.

Interiors: Cinema and the Home 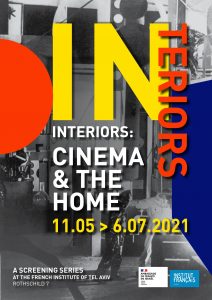 This screening program finds its inspiration in French philosopher Gaston Bachelard’s seminal study, The Poetics of Space (1958), whose first Hebrew edition has recently come out (Babel 2020), to the great benefit of Israel’s readership. Over sixty years since its initial publication, this important treatise continues to impact architectural thinking on what turns a house into a “home”. For Bachelard, a home is not so much defined by the materiality of its space, as by the emotions, memories, and dreams that are invested in this space. Traces of this investment, he further asserts, are not found in blueprints or cross-sections, but only manifest themselves through ephemeral descriptions of various spaces in literature and poetry. This is why, in Bachelard’s mind, a “true home” is a home that we “read”.

Yet is the world of the Word the only one capable of enlivening the domestic space and exposing through it life itself? The films in this program offer a counterargument by showing how the world of Cinema can achieve the same goal, though via its own particular means and inflections. With one foot in reality and another in dream, cinema releases the space of a house from its mundane entrapments, and we can suddenly “see” it as more than the sum of its material elements: as our home, a repository for all the meanings it evokes for us and all the spaces it occupies within us.